Taos Art Museum﻿ opened in 1994. In 2002, it moved to the beautiful and historic home of Nicolai Fechin.  The museum's permanent collection features stunning paintings by the Taos Society of Artists.
HISTORY OF THE TAOS SOCIETY OF ARTISTS

​The artist Joseph H. Sharp first visited Taos while on a sketching trip in 1883, and was captivated with its enchanting atmosphere. He is often referred to as the artist who "started it all." Later, while studying in Paris, he shared his enthusiasm with two artist friends, Bert G. Phillips and Ernest L. Blumenschein. As a result of a broken wagon wheel on September 3, 1898, the two artists stayed in the Taos area instead of completing their scheduled trip to Mexico. Back in Paris, Blumenschein met E.I. Couse and told him of a mystical mountainous region. Intrigued, Couse was also inspired to explore Taos. Oscar E. Berninghaus joined the Taos artists, and with the addition of Herbert Dunton, a painter of cowboys and ranch life, the "Founding" group numbered six. On July 1, 1915, the Taos Society of Artists held its first meeting. The proposed purpose of the association was to promote the showing and sale of their work.​ 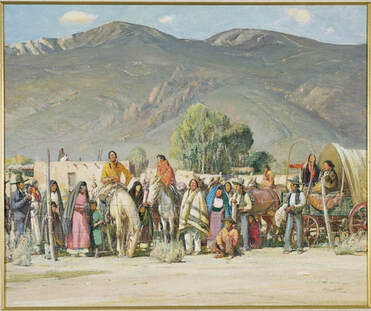 Oscar E. Berninghaus, "Watching the Ballgame"
​
​
​
​With a commercial illustration background, the St. Louis-born Oscar E. Berninghaus, an acute observer of life in and around Taos, painted Watching the Ballgame.​ Berninghaus claimed that he was "infected with the Taos germ" and was "fascinated by the people, the Indians, and Mexicans, the adobe architecture, the sagebrush, the mountains, they all inspired me as a subject matter." Baseball was a favorite community pastime for Native Americans, Hispanics, and Caucasians alike. When fellow artist Blumenschein wasn't painting, trout fishing, or playing the violin, he played on the Taos team until he was fifty years old.

During the 1920s and 1930s, there was an influx of artists who showed tendencies toward modernism. Andrew Dasburg arrived in Taos in 1918 and was a key proponent of modernism. Influenced by the works of Paul Cezanne, he brought the cubist aesthetic to Taos. Kenneth Adams, Ward Lockwood, Barbara Latham, and Howard Cook were some of the artists influenced by Dasburg. They came to Taos and spent their careers there. Lockwood, Latham, and Cook eventually settled in Dasburg's neighborhood on the north Talpa ridge. Artists enjoyed painting the Picuris Mountains to the south, patterns created by strip farming, and adobe houses seemingly growing out of the terra firma.
​
Following the arrival of this initial group of artists, the Taos area has grown to become a renowned international art market and artists' community. It is estimated there are more artists, per capita, in the Taos area than in any other city in the world, including Paris, France.​