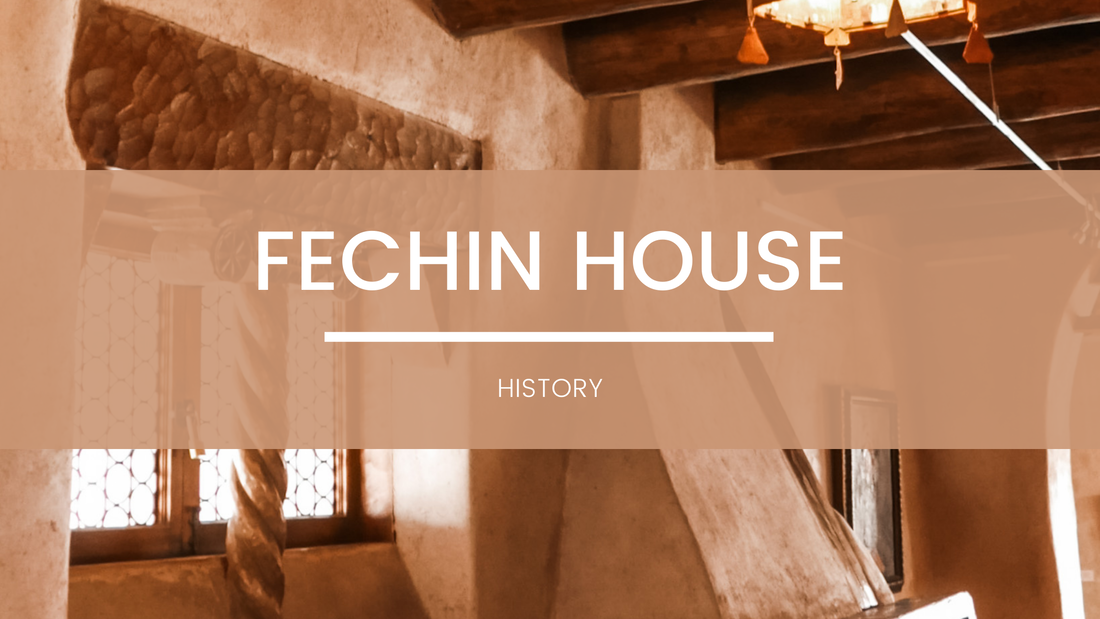 The final result was a 4,000 square-foot, asymmetrical, adobe Pueblo and Mission Revival house with twenty-four-inch walls. The Fechins created a wonderful home and a masterpiece of Southwest architecture. The spaces within the home were sympathetic to Nicolai's art collections and his carvings of sculpture, furniture, and architectural ornament.
​Working in his father's workshop as a youth provided training for Nicolai as a carver. He absorbed various influences from his Russian heritage and his encounters with Native American and Hispanic cultures. He imported sugar pine and poplar from the NW, which was easier to carve and mostly knot-free to allow for his intricate carvings. First, he adzed all the wood, creating beautiful undulating surfaces. Then, armed with mallet and chisel, he began carving columns, stair rails, vigas, doors, and furniture. The wood was then tinted a uniform color with a thinned stain to allow the natural grain to show still. Lastly, each piece was hand waxed to a beautiful sheen.

With the local metalsmith, he fashioned light fixtures, door pulls, and hinges. Nicolai was also a coppersmith: The kitchen's copper light fixtures and copper hood are of his own making. By 1933, Nicolai and Alexandra, with their workmen, had created one of the most exciting homes in Taos. Eya stated, "A Russian house evolved out of New Mexico mud."​​
Unfortunately, the family's joy was short-lived. The couple experienced marital problems, and Nicolai, with his daughter Eya, left their home in Taos. Alexandra assumed the responsibility of maintaining the property. She lived in the house until 1946. The house became too much for her to care for at that time, so she closed the doors and moved into Fechin's studio. The house remained untouched for 30 years until Eya returned to New Mexico in 1977, when she was appointed conservator and began the process of restoring the home to its former glory.

​In 1979, the Fechin House was placed on the National Registry of Historic American Homes and the State of NM Registered Cultural Properties. Living in the studio, Eya created the Fechin Institute and maintained active exhibition and education programs until her death in November 2002.