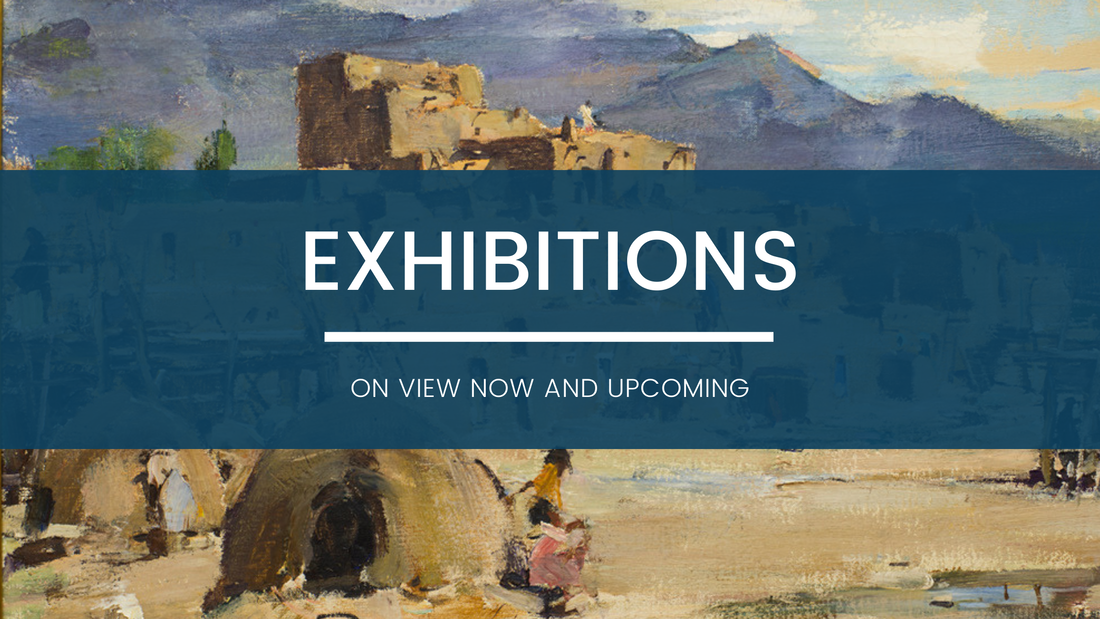 Through the Eyes of Fechin
On view through January 9, 2022 in the Fechin House 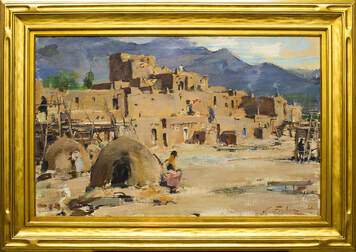 "Taos Pueblo" Nicolai Fechin, 1928, oil on canvas, 20.5"x33" Courtesy of the Peterson Collection
Each artist approaches the canvas in an entirely unique manner; their individual interpretation is as unique as a fingerprint. Renowned artist Nicolai Fechin (1881-1955) was no exception. His exuberant yet precise use of line and color to define form has captivated viewers for over a century. Set in the context of the exquisite home Fechin crafted by hand, and  primarily featuring paintings, drawings, sculptures and photographs from private collections not previously exhibited in Taos, this exhibition will provide a unique opportunity to experience Fechin’s world through his keen eye.

Taos Art Museum at Fechin House is supported in part by generous grants from New Mexico Arts, the National Endowment for the Humanities and the New Mexico Humanities Council.

Exhibition Statement
The global pandemic of 2020 affected my small household, and my studio practice before most of the rural community in which I reside was fully aware of the imminent threat. My daughter returned home unexpectedly from her studies in a COVID-19 hotspot, and we promptly quarantined; before the shutdown, before paper product shortages, masks and gloves, and hand sanitizer, before mass internet sharing of the experience of social isolation, before a single case of Covid-19 was reported in our county and only two cases in the state. Our experience of quarantine was singular for a time but quickly became commonplace.

My work, both commercial and artistic, was dependent on bodies in the studio (models or clients) and became an impossibility overnight. I found myself with neither subject matter for the projects I was immersed in nor income from my commercial work, but I was loath to pause in my momentum. On the first day of quarantine, I began photographing the people-less quiet of a home and studio in isolation. The still lifes, which I shared daily on the internet, are a  visual journal of days passing with little change but the weather and season and what was provided by a small plot of land in rural New Mexico. The quotidian and mundane were magnified as I turned my eye to what had previously been overlooked and barely acknowledged.  There were natural events that occurred over time that were particular to place, which I included in the slowly turning narrative of the images (a plague of moths, drought, an unprecedented snow in early September, flocks of songbirds falling dead from the sky), but ultimately the body of work speaks to a more global shared experience of this unfathomable time.
The images depict objects symbolizing the specificity of this era of social and physical isolation; groceries held more emotional weight, fruits and vegetables which would not last became poignant, mold was heartbreaking, small blooms of common weeds were gloriously exotic when hothouse flowers were unavailable, an abundance of toilet paper was wealth. News of illness and deaths and unrest and racism and riots filtered into the images, and they took on a  look of vanitas paintings of the 1700s, replete with symbols alluding to the transience of life;  bones, dead birds, fruit well past its prime, drapery inferring shrouds. The shared images became my conversation with the outside world, and the overwhelming response to the growing body of work kept the studio alive. A patron ordered a portfolio of the first forty images, thus enabling me to begin production of prints of the first forty of a body of work that now contains over one hundred images.

The quick switch of gears in my work was a technical change as well as a subject change.  After a consistent career based on analog process, film, black and white imagery, large format cameras, antique and obsolete printing methods, and a darkroom practice of over forty years, I  chose to produce this work in color and digital medium. This choice was partially precipitated by the ease of sharing that the medium provides, but I have also viewed ‘the pause’ as an opportunity to hone my skills in a new direction and catch up with the technological advances of the medium of photography. It is rare that one is offered unfettered time to advance in a new direction, but that is precisely what this pandemic has afforded me. ~Zoë Zimmerman