INTRODUCTION
​Doel Reed (1894–1985), a highly successful American printmaker and painter, is best known today as a Southwestern artist and “master of the aquatint.” Following an early career in Indianapolis and Cincinnati, in 1924 Reed became a professor of art at Oklahoma A&M College. Although Reed turned away from his early adoption of Impressionism, he remained sensitive to the effects of light and color for his entire career. In the 1930s, Reed became a master printmaker, lecturing widely on the aquatint technique. Like many other Depression-era artists, he embraced Regionalism, which favored rural and Midwestern subjects. By the end of the 1940s, Reed enjoyed a national reputation and had developed his signature style, a conservative modernism that is characterized by geometric abstraction, dramatic use of light and dark colors, and a focus on emotional impact. Reed began summering in the Taos artists’ colony starting in the mid-1940s and permanently moved to New Mexico in 1959. The landscape, history, and religion of New Mexico were rich sources of inspiration for Reed for the rest of his life. Over Reed’s long and successful career, he was both influenced by and contributed to national and international artistic trends. But it was the rich and varied American landscape, often framed by a backdrop of dramatic clouds and weather conditions, which was his primary source of inspiration. 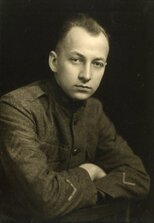 EARLY YEARS
Impressionism and Artistic Experimentation (1915-1929)
Doel Reed became a landscape artist because of his early training and experiences in Indiana and Ohio. He grew up in Indianapolis and later studied a​t the Art Academy of Cincinnati (1915–1920), where many of his teachers were Impressionist painters and printmakers. In 1918, Reed’s education was interrupted by his service in the U.S. Army in France during WWI.  Before he was drafted, Reed was already a member of the Brown County Artist Colony in Indiana, where he painted outdoors in an Impressionist style. Reed’s time in Brown County, called “Indiana’s Switzerland,” overlapped with many other successful landscape artists who were there, including printmaker Gustave Baumann and painter T.C. Steele. Reed moved out “west” in 1924, where he took a job at Oklahoma A&M College. In 1926, Reed trained at the famous Académie Julian  in Paris, France. Paintings and prints from this period show Reed’s early interest creating dramatic, highly atmospheric images. Reed abandoned outdoor painting soon after he arrived in Oklahoma, citing insects and wind as the primary problems.
American Painter, Printmaker and Professor (1930–1950)
The 1930s and 1940s were pivotal for Reed’s artistic and professional development. The United States was in  the midst of the economic crisis of the Great Depression, and a nationalist desire to create “authentic” American art resulted in the rise of Regionalism. This style favored Midwestern and rural subjects in a largely realist style. Reed became a Regionalist artist, joining the ranks of Thomas Hart Benton and John Steuart Curry, among others. Across the U.S., printmaking experienced a revival. Reed lectured widely on how to make an aquatint, and he trained many students in the technique. In 1942, he was elected Associate Member of the prestigious National Academy of Design for his graphic work, becoming a full member in 1952. By the end of the 1940s, Reed had developed his signature style, a conservative but modernist approach to landscape. Note his use of geometric abstraction and the influence of surrealism, evident in the mysterious lighting and ambiguous narratives. 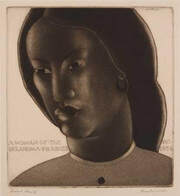 ​Models and Muses, Doel Reed’s Women
In addition to landscapes, Reed specialized in images of women. These figures include muses, bathers, and goddess-like nudes resting in the landscape, as well as archetypes of strong American women. His interest in the female figure started early. During a school visit to the Indianapolis Art Museum, Reed’s enthusiasm for a painting with seminude mermaids embarrassed his teacher and classmates. Later Reed drew inspiration from the French painters Jean-Baptiste-Camille Corot (1796–1875) and Paul Cézanne (1839–1906). In the 1940s, Reed produced prints of women for the Associated American Artists and the Prairie Print Makers.
The Ancient Land, Doel Reed and the American Southwest
Starting in the 1940s, Reed became fascinated by the natural beauty and culture of New Mexico. He moved to Talpa, NM, directly outside of Taos, in 1959. He was not a member of the Taos Moderns, who favored abstract painting, but he regularly exhibited with many of them. As a New Mexican artist, Reed drew inspiration from the Sangre de Cristo Mountains around Taos. He made drawings in nature, which he then used to create paintings and prints back in his studio. His goal was never the pure recording of landscape. Instead, Reed emphasized emotional content, and created dramatic, moody, and often surreal images. His landscapes lack human subjects, but often include churches, graveyards, adobe ruins, and the moradas (meeting houses) of the Penitente Brotherhood. Many of these works focus on the transitory nature of human existence.
Doel Reed and Religion
Penitente moradas (chapels) and cemeteries were important subjects in Reed's work between 1951-1961. The Penitente Brotherhood (Los Hermanos de la Fraternidad Piadosa de Nuestro Padre Jesús Nazareno) is a Catholic confraternity. They have been active in New Mexico and Colorado for over 200 years.

In the early 20th century, tourists traveled to New Mexico to watch the Penitente’s dramatic Holy Week processions. Penitente practices were often described by outsiders as violent and exotic. Reed’s images remove the human element, focusing our attention on the buildings, which are framed by dramatic skies. In his paintings and prints, moradas stand as lonely witnesses to faith and the passage of time. By the 1970s, many Penitente chapters in and around Taos were abandoned, leaving their moradas in ruins.

Although Reed was a Protestant, his fascination with Catholic churches and religious practices may be related to his experiences in France during WWI. Stationed in Tours, where he recovered from a mustard gas attack, Reed regularly attended services at the city’s Gothic cathedral. 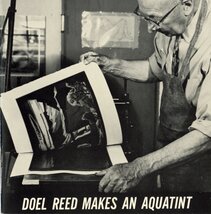 ​Doel Reed Makes an Aquatint
Reed was elected an Associate Member of the National Academy of Design in 1942, in the area of graphic arts. Between 1937 and 1947 the Association of American Colleges paid Reed to travel to colleges across the United States and demonstrate the aquatint technique. The 1943 January and February issues of the widely read American Art magazine featured Reed’s aquatints and a discussion of his technique, demonstrating his growing national reputation. In 1952, after Reed was elected to full membership in the National Academy of Design, he signed all his works: Doel Reed, n.a. [National Academician], demonstrating his pride in this achievement. In 1965, the Fine Arts Museum of New Mexico produced Doel Reed Makes an Aquatint.